A downloadable game for Windows and Android

SUPPORTING US ON PATREON GRANTS YOU:

Aurelia is a retro pixel art visual novel where you will explore a fantastic medieval world and meet beautiful women, exotic races, and monster girls.

You will take the role of a young man that inherits his grandfather's house and, on a sudden twist of fate, becomes entangled with a mysterious sorceress. 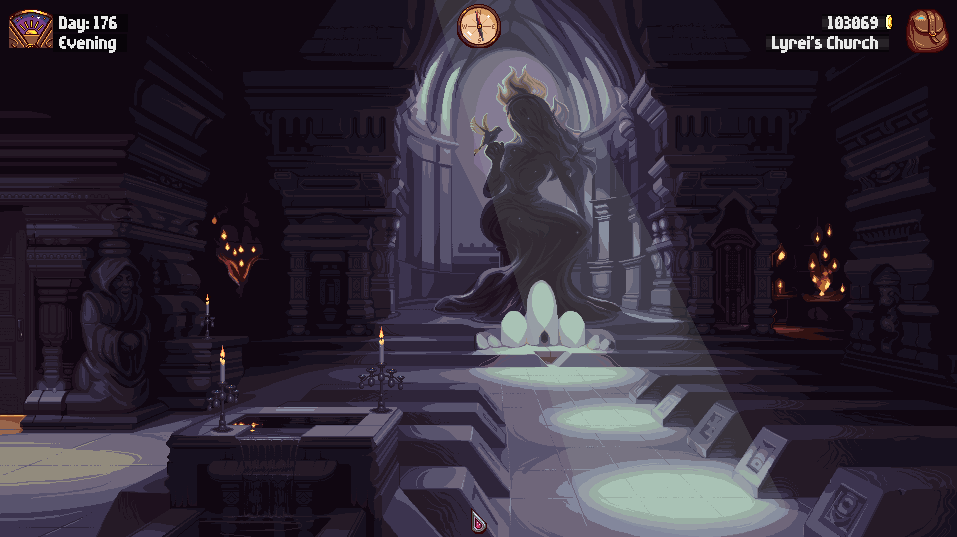 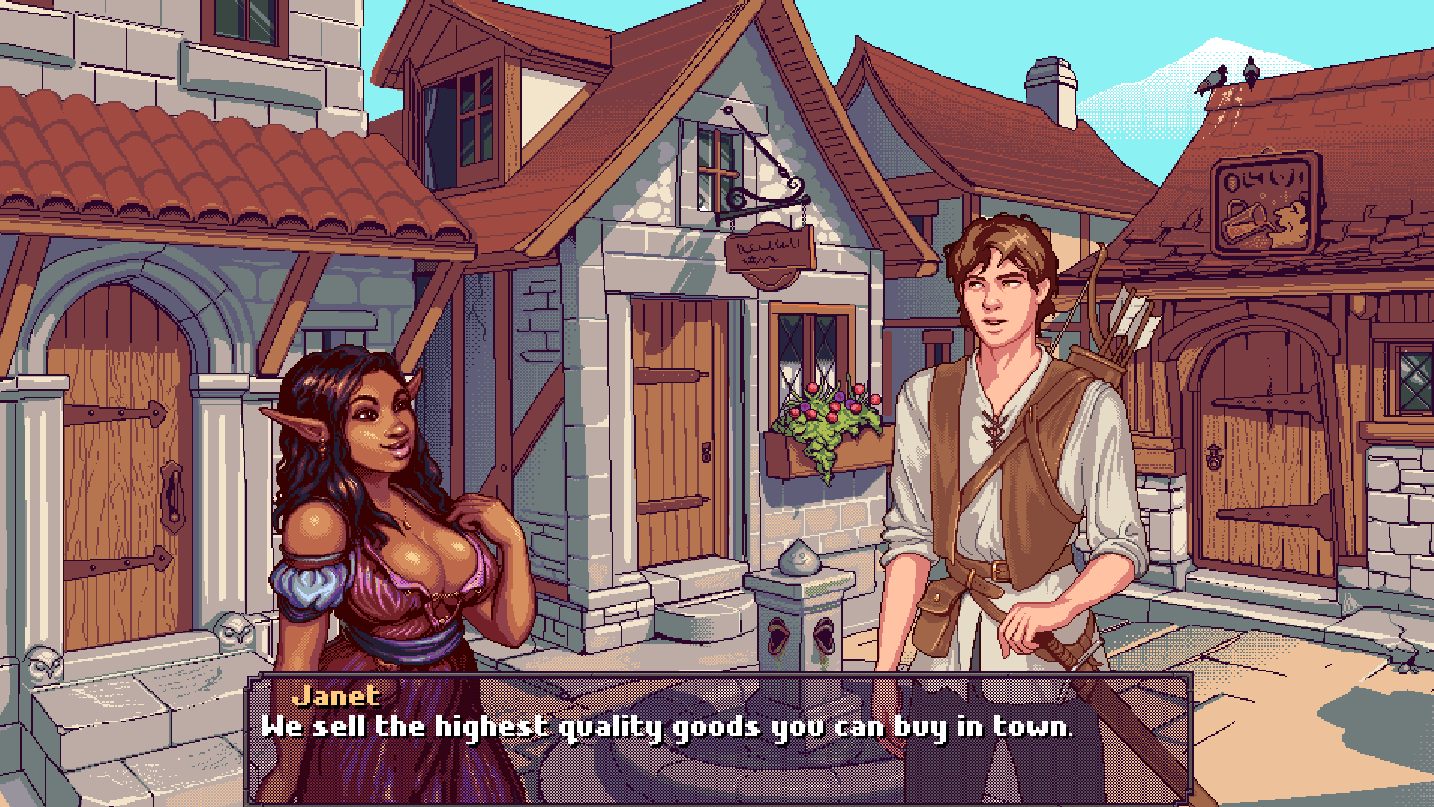 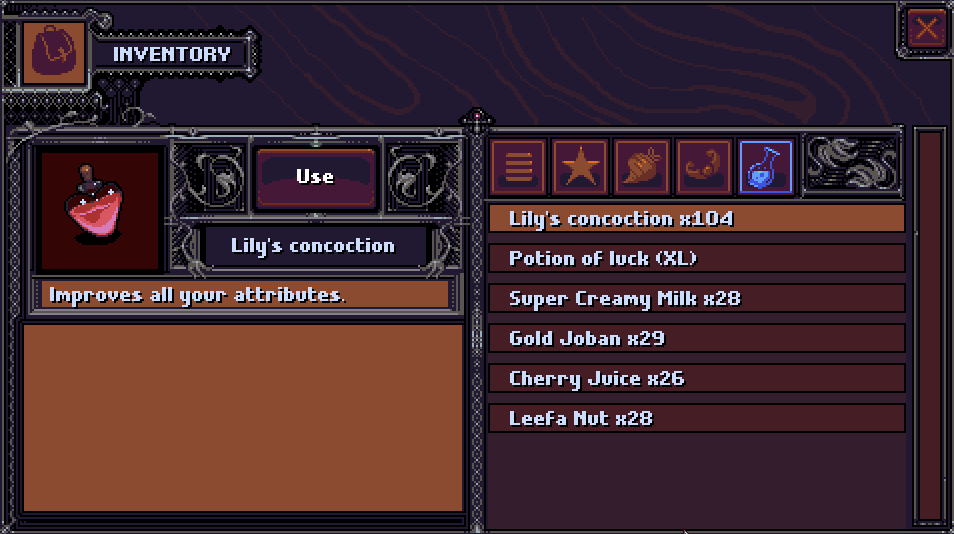 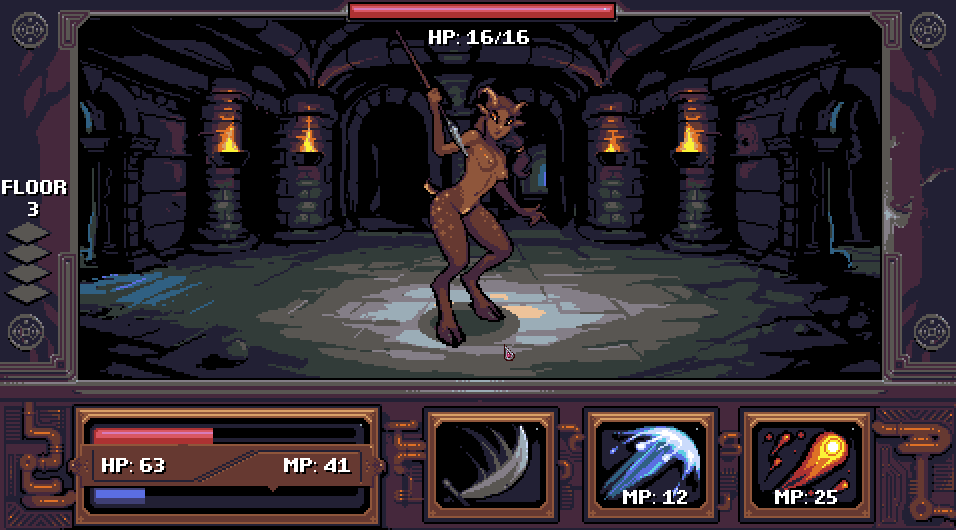 Many things to do:  Relax while fishing, play blackjack, craft potions... 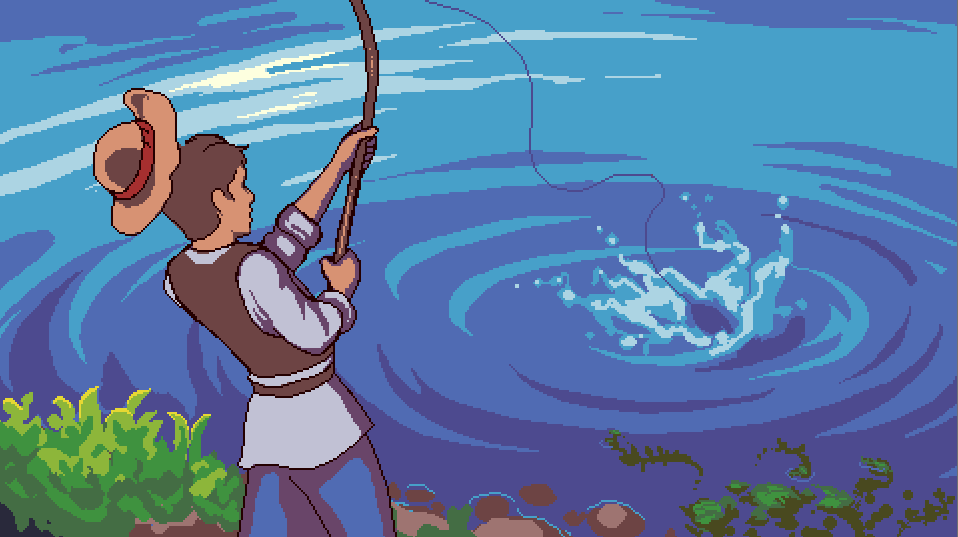 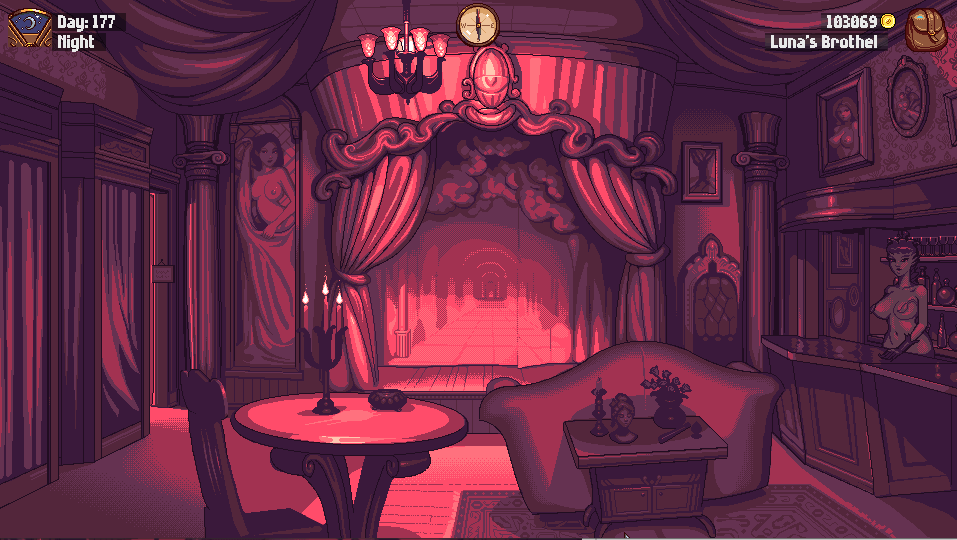 +80 achievements for the completionists, which will reward you with extra scenes 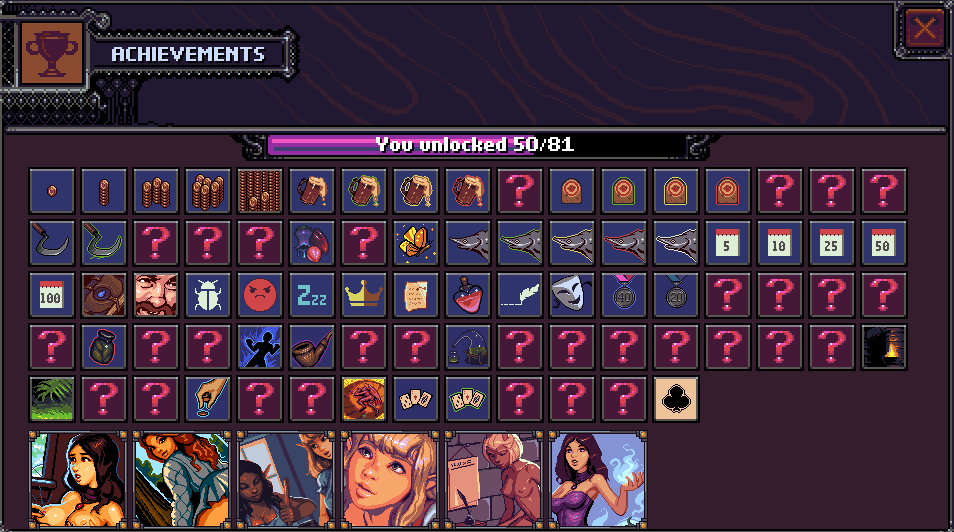 Is there a gallery for the dungeon enemy scenes?

How can i unlock the dungeon scenes?

When you are in the dungeon(after you beat it the first time) you have to fill up the heart meter on the right and click on the meter when it its full to view the scene with the enemy you are fighting.

you fill the meter by attacking and defending, the better you do the faster it fills.

What an excellent game. I'll be following your dev studio quite closely for future releases. The art direction here is amazing and you managed to tap into the RPG aspect that makes people keep playing. That is to say - the steam roller train wreck of maxing everything out, becoming richer than god and trivializing encounters that were initially pretty hard for them. Great work. Obviously once I found out about the mask in the dungeon I also HAD to acquire it. Would be funny if that had a part to play in a side quest.

We do plan to expand on Ohro's Mask to justify it's price/grind in the future.

Thanks Tyson, It's unlikely that we'll add these fetishes/kinks into Aurelia.

Hopefully we'll have the steam release ready somewhere around next year.

Excelent art and fun to play.

A lot of time is required to make progress in the story and ero scenes take a while to unlock so I don't recomend it if you are looking for a quick fap.

I've already finished the game as the current version and unlocked every scene, only a few achievements to go.

Really enjoyed the experience and I'm looking forward for what else the team has in store for us. 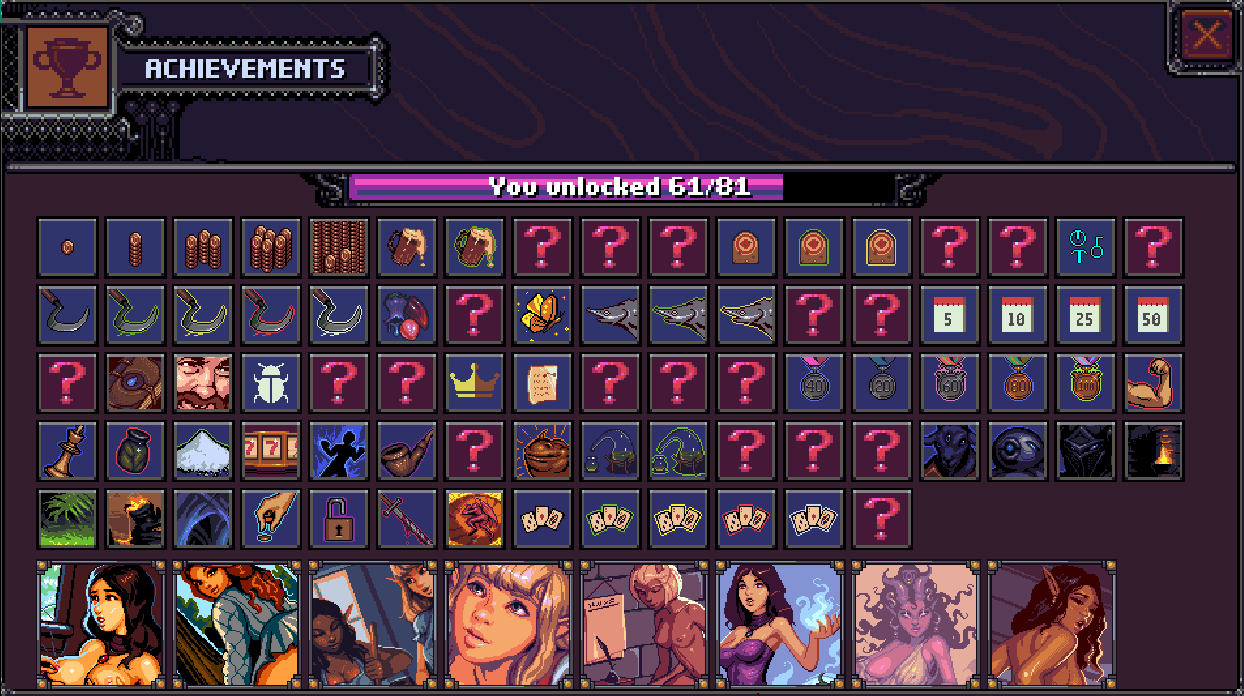 Ok, since almost everyone here's confused on how to open Ivy's attic, here's how to do it.

I don't think you need to do Dismus and Reynauld's quest (the two guys chilling in the tavern) to unlock the attic. The silver crest is only needed to unlock Erza (the hot demon chick) and Melkor's tomb. I may be wrong here though.

So what you need to do first is to find five hidden notes scattered in your house. Basically, click everything in your house. The notes are mostly hidden in paintings and windows. The first four notes are obtainable at the start of the game and the last one is in Ivy's room (her window, if I'm sure).

With all five notes unlocked, go to your inventory and look through the notes. Each note will have a different symbol. These same symbols are on the grandfather clock in your room. Place the hand of the clock on the symbols one by one in the order given in the notes. Note 1-5 symbol first, note 2-5 symbol next, and so on. After you complete the puzzle, you get a key. I'm pretty sure you know what you need to do next.

Also, if you haven't unlocked Ivy's room yet. Just progress through her storyline. I don't know if it unlocks automatically because it was after I paid Naamu (the almighty dragon that has made himself comfortable on a rock near the lake) 25G for a tip (to finish the achievement) that I found out that her room was unlocked. So I don't know if Naamu triggered it or not. Probably not, cause he's just supposed to be a support NPC.

Now as my reward, I'd rather appreciate it if someone would be kind enough to help me with unlocking Erza third sex scene. That's the only scene I have yet to unlock in v23.1. I have tried both Naamu and the Wiki page, but still no luck, godammit!

i kinda just clicked every combo

Reply
nobody42005 hours ago

This was the one quest that I was absolutely stumped on, and needed the wiki for. I unlocked the attic, and nothing happened, so I was very confused. Perhaps we can have  a notification/dialogue text show up saying "Found an ancient map"?

Hi. Let me know if you understand. But I know the first step is talk to orson about tavern drunk and then talk to drunk guy and then that you should go in the hill and find the stuff they talked about. After that I don't know.

Really??? No one can't help me about the gungeon???? I still couldn't open the attic. I talk to taverns drunk and I found the stuff. Please heeeeeelp.

Hello, on android it crashes randomly. I'm wondering if anyone else is having this problem or if it's on my end?

Just when it loads for me it crashes, so you're not alone

Reply
nobody42005 hours ago

Played through 20+ hours of the game on my Samsung A50, no issues with stability whatsoever. @Derriquethefreak and @Joro1144, what devices were y'all using? And what version of the game was it?

I still can't get over how the "official" promo art has a dick tip in the center. But you wouldn't notice it unless you've scene the picture without the title covering it up.

Ohro run is still obscenely difficult on Android. Swiping to move and attack gives way too much of a chance for delays.

Hi. Please someone help me. How can I open the attic????? I already found the stuff that drunks guy said.

Just downloaded the game and am really digging the visuals, but most of the times no text appears in the speech bubbles. I am using the android version. How can this be fixed?

i can't play it, when I try to open it, put  a error window

this game is amazingly good. One of my favorites ever

When I try to download the game it keeps giving me an error that says it's potentially harmful for my pc....I assume the game is safe, but just wanted to double check.

Windows does that for many apps it considers "unknown", as a preventive security measure.

I still can't found any dungeon locations, it's strange. But I have all max stats of RPG parameters.

its in the cave tomb location further into the story probably if you havent been there yet.

Thanks! I've already discovered a lot of different things, but I just didn't know how to go further through the story.

Hi. Did you understand any thing about it? I think it's about the attic that it is in ivy's room. But I still couldn't open it.

The game just crashes for Mobile when it tries to load.

The game just shutdown immediately when the loading bar is full.

How exactly do I do Ivy's clock riddle?

Ok, so, i played this game for 3 hours now. Im liking it, the drawings are good, the characters are too and all. There just js a BIG MAJOR flaw.

Picture this: you are playing this game all chill on your couch/bed/random comfortable place; then an h scene begins, it's a nice scene and all, you enjoy it even by just thinking:"Woah, i didnt expect this scene here right now"; but suddenly, someone enters the room inside of which you are, for really any reason at all: you reach to the top right corner of the screen to open the pause menu, but you cant! Probably because it's not a good place to save for the game and all; still: you are on an h-scene and someone entered the room, your last option is to click really fast and skip the scene in order to be able to open the pause button.

I suggest to make the right click open a smaller pause menu: one with just the options that hides whatever's on the screen and, among the things, gives the player the option to put the game windowed and change volume of the audio

Emergency exit is already in the game, pressing Esc twice closes it inmediatelly.

Yeah, indeed: the fact is that it closes the game completely...

I agree that being able to do a quick pause would be a good feature. On the silver lining side, I think if you double ESC to quick close, it does keep an autosave at that same moment? I need to test it

Yes, the game has an autosave feature that saves on the start of every conversation.

Meaning if you're in the middle of a scene and you close up, you'll get to open up that scene from the beginning again.

when will the v23 hotfix be posted

How to get bone ash？

Go to the tavern, and talk to the minotar. The mini game you do with him is the first way I personally found bone ash.

Lol, im new to the game and was thining about the pokemon dude

does anyone have a guide or anything for scenes? Im missin some and idk how to trigger em

What's gonna be on the next update

In the journal I have a question mark on the third spot in the third row. Is there someone I haven't discovered yet? If yes, how do I get started on that person?

Edit: are there scenes for the monsters beyond the first 7 levels of the dungeon? When I click the heart on any of them they just get defeated with no scene.

Buy all whores in the brothel.

Only scenes for the first biome so far, i tried all others.

This game is amazing, couldn't force myself to stop playing until i finished it, truly awesome. By the way, does anyone know how to unlock the demoness last scene? After projections and dp

You need to "beat" Melkor's dungeon by defeating the last boss at floor 28. When you do that, you get booted out of the dungeon (on repeat attempts you can go past that, and the levels increase endlessly). After this you can talk to her and she gives you a new quest, which unlocks the third scene.

I really want to play this but I only have an android and it keeps crashing.

I have the same problem

How can i aquire an ancient sap and how can i get scarlet's dagger?

Scarlet’s dagger is under the shrubbery in the garden

Hi. Did you understand any thing about ancient sap? Please help me🥺🥺

You can get ancient sap inside the dungeon lad, but first if you want to unlock dungeon go to ivy's room in the morning there you can access to attic and the rest is up to you my friend.

Well if you're aware to access the attic you need to go to ivy's room(MC's main chick) then try to spam click the attic. Well the attic is not that easy to see but if look up in Ivy's room you will see something different. Let me now if thats helpful men.

I know where is attic and I click at it every morning but just show me a message that ther is key hole on it.

Legendary game. I haven't even finished it yet, about halfway in I'd wager, but I am shocked at how good this is. Incredibly extensive, detailed and witty. 5 stars, my god.

When will we get our new update